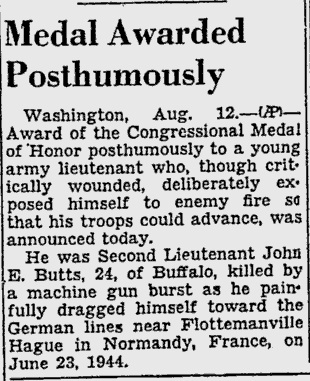 Citation:
Heroically led his platoon against the enemy in Normandy, France, on 14, 16, and 23 June 1944. Although painfully wounded on the 14th near Orglandes and again on the 16th while spearheading an attack to establish a bridgehead across the Douve River, he refused medical aid and remained with his platoon. A week later, near Flottemanville Hague, he led an assault on a tactically important and stubbornly defended hill studded with tanks, antitank guns, pillboxes, and machinegun emplacements, and protected by concentrated artillery and mortar fire. As the attack was launched, 2d Lt. Butts, at the head of his platoon, was critically wounded by German machinegun fire. Although weakened by his injuries, he rallied his men and directed 1 squad to make a flanking movement while he alone made a frontal assault to draw the hostile fire upon himself. Once more he was struck, but by grim determination and sheer courage continued to crawl ahead. When within 10 yards of his objective, he was killed by direct fire. By his superb courage, unflinching valor and inspiring actions, 2d Lt. Butts enabled his platoon to take a formidable strong point and contributed greatly to the success of his battalion's mission.